Some people might think ” Strawberry tart, easy!”. Make the dough, add some vanilla custard and top it with strawberries. Well, yeah, but it takes a bit more time if you don’t want to use the ready-made vanilla custard nor add almond essence in the butter.
I adapted Conticini’s recipe and combined it with Hermé’s sweet dough – it is covered with an almond butter mixed with a vanilla cream, topped with a coulis (sauce) made from berries and the strawberries resting like a crown, powdered with icing sugar and pistachios.

Prepare the dough, the berries coulis and the almond butter the day before, assemble the cake on the day you want to serve it, it will taste even better. 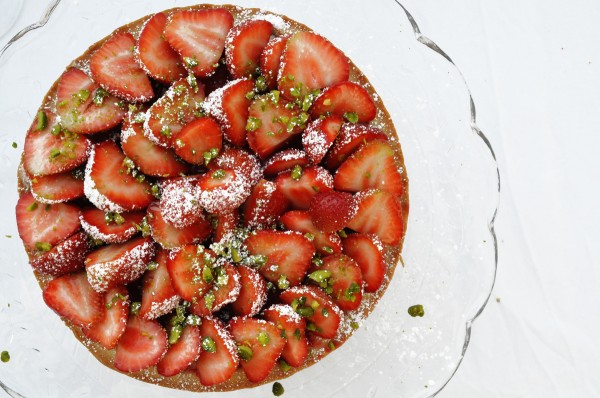 1. Cut the butter in cubes and mix it until soft.
2. In order, add: the icing sugar, almond powder, salt, vanilla, the eggs then flour.
3. Mix until it forms a homogenous dough. If you over work the dough it will lose its crunchiness.
4. Cut the dough into 4 pieces. Roll the dough in cling film and keep it in the fridge for 4 hours.

1. In a pan bring the milk and the vanilla pod cut in half and grated to a boil, take out of the heat as soon as it boils.
2. Let to rest for 15min for the vanilla to infuse.
3. In a bowl, whisk the egg yolks and the sugar until “white” or fluffy.
4. Then add the flour. Mix well to get an homogenous paste.
5. Take out the vanilla pod. Pour half of the milk onto the egg mixture. Mix well then pour it back in the pan with the rest of the milk.
6. On medium heat bring to a boil while continuously whisking until it gets thicker.
7. Once it has thickened place in a baking dish and cover with a cling foil film directly on the cream (so that it doesn’t get a hard crust).
8. Place in the fridge for at least an hour.

In a bowl whisk the almond powder with the softened butter. Add the crème patissière once cooled, the icing sugar and the rum. Whisk again to obtain an homogenous cream.

150g strawberries, a handful of raspberries and blueberries.
3 Tbsp sugar cane syrup.
The juice of a lime.

1. On 150c° blind bake the dough 20 min with beans or rice placed on baking paper. Take it out of the oven, take away the paper and beans and bake an extra 15 min. 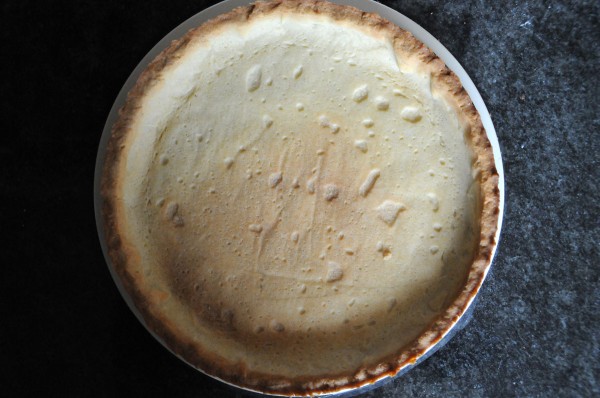 2. Spread the almond butter cream onto the dough then place in the fridge for 20min. The butter becomes solid and the strawberries won’t sink in.
3. Spread the berries coulis. 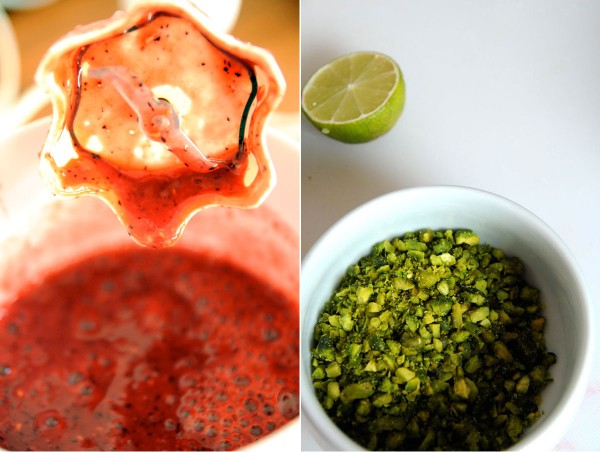 4. Cut the strawberries in half and place them on the cake inside side up.
5. Crush the pistachios.
6. Sprinkle the pistachios and icing sugar over the tart. Serve. 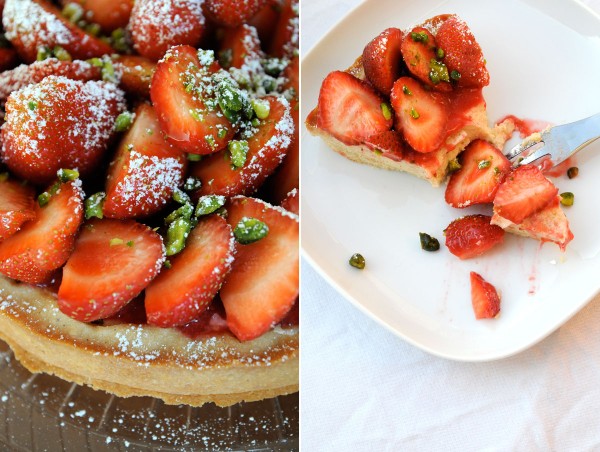